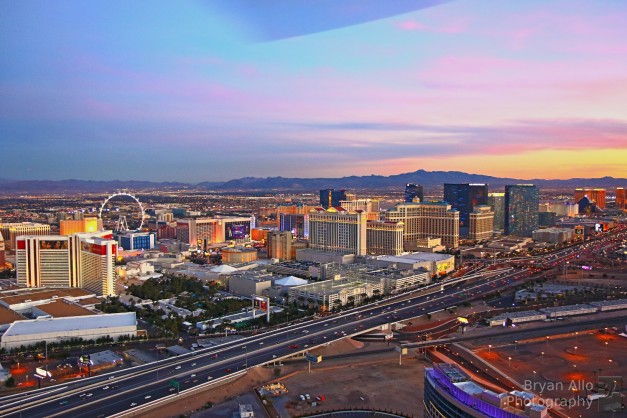 The only way to see the Las Vegas strip and city lights is from 3000 feet, strapped-in, with the doors open, at sunset. About a week ago I had the opportunity to experience this unique perspective on Sin City. After searching for a unique vantage point on the city for my ongoing collection of limited edition skyline panoramas, I decided to look into taking one of the helicopter tours. However after some research and talking to some of the folks in the business, I concluded that I would have to charter the whole helicopter for an extended period to be able to realistically get a good shot of the skyline.

This was a much more sophisticated endeavor than it seemed at first blush. For starters, a separate flight plan would have to be filed with the FAA 72hrs prior to flight time, I would have to determine where exactly I wanted to fly to, and what I wanted to photograph as much a possible. The folks at Maverick Helicopters were most helpful from the very beginning. Their agent, chief pilot and staff went the extra mile to get me up to speed on the process including fast tracking the flight plan filing and approval process with the FAA.

Our amazing pilot Mike took the time to work out all the final details of the flight, points of interest, safety procedures and local airspace. I was able to communicate some of my objectives as far as framing my shots and he took all my feedback and integrated it into is flight patterns, even when I least expected. The helicopter ride was very smooth and stable. While I had previously worked through some of the challenges of aerial photography (see my previous post Aerial Photography: Sacramento to San Francisco Bay) I encountered some new challenges.

I was only too happy to be strapped in with the door open the entire flight. This meant that I would not have to shoot through the polycarbonate windows. However what I forgot to consider was the fact that I would have a huge rotor above my head creating a downward draft the likes of a hurricane wind. The rotor draft was also not a steady stream which I could compensate for, but more of very fine, high frequency pulses that introduced a corresponding resonance through the lens and camera body. It was so powerful that even the world class Canon EF 70-200mm f/2.8L IS II lens and it’s 4 stops of image stabilization, could not cope at all. The down draft alone ensured a “keeper rate” of less than 40%.

I shot primarily with the Canon 7D Mark II and the EF-S 17-55mm f/2.8 lens. From past experience, speed and responsiveness of the camera are the most critical characteristics for aerial photography. Even then, at times I did wish I had the 1Dx on hand for some of the shots. The 7D Mark II kept a steady stream of shots coming through. In all I shot over 150GB or photo and video. I will be posting more detailed shots and video as I get through sorting and processing it all.

I would also like to say thanks to Cindy, Joe Bishop, Jim Ogletree, Mike Martin and all the folks at Maverick helicopters for making this possible. I look forward to flying with you folks again in the future.

Heading out to meet the folks at Maverick.

Maverick limo waiting to pick us up. 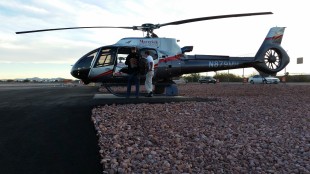 Going over the flight plan, helicopter and safety with our pilot Mike.

All strapped in, ready for lift off. 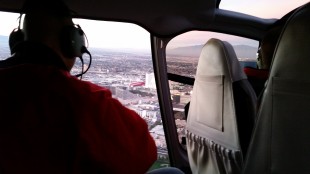 Lift off at sunset 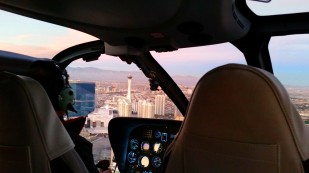 Heading up the east side to the strip towards the Stratosphere

Pushing hard to get my shot given the storm of variables. 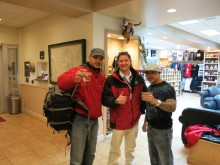 A celebratory champagne toast with our pilot

Rob, great guy, cool and took care of anything we needed. 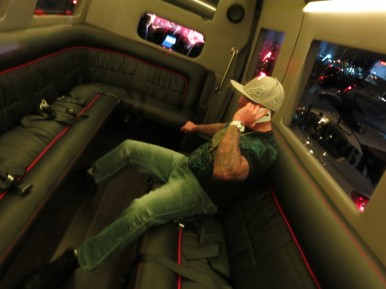 Mellowing out on the ride back to the hotel. Taking it all in. 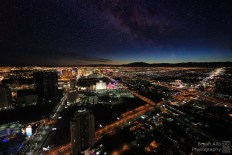 Teaser: getting creative with one of the ultra wide shots.

Teaser: getting creative with one of the ultra wide shots.