San Francisco from 1500 feet over the SF Bay

About a month and a half ago, I had the opportunity to go flying with my good friend Eric. We had been talking about getting out and flying the friendly skies for a while and everything seemed to be aligned for that to happen. We booked a fairly new 2008 Cessna 172 single engined aircraft. I had just taken delivery of the Canon 7D Mark II and thought it would be the perfect camera to explore aerial photography. This was meant to be as much an exercise in private aviation as a study in aerial photography and the challenges it poses. I hoped to learn enough about it to develop my techniques and understand what questions to ask as well as the requisites to successful photography of ground subjects.

The short version is this: Arial photography is a completely different beast that simply cannot be tamed. Below are what I feel are the requisites. Understanding these does not guarantee a successful capture of your subject but it will increase the odds of success.

Overall this excursion was a success. I learned a great deal. I’m planning another aerial photography excursion sometime this year. I’m also considering a helicopter instead of an airplane and will also consult with private aviation authorities on what other options are available to me. It was a fun exercise flying the friendly skies, checking in with ATC (Air Traffic Control) and seeing who’s up there doing what.

We took off from Sacramento Executive airport, flew over Travis AFB and onto the SF Bay via Sausalito. ATC folks were a very nice and friendly bunch and took interest in our photography outing. It is humbling to know that they are there 24/7, all over the country, keeping the skies safe. Cheers to them!

Below are some highlights. The shots are straight out of the 7D Mark II and have not been processed. 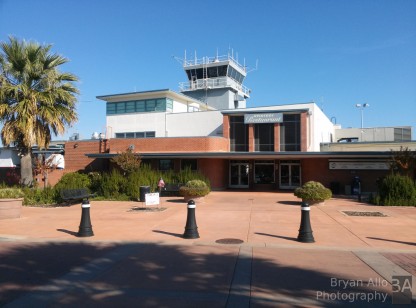 Taking off from Sacramento Executive Airport

Eric doing what he does best