It’s taken me almost a year to post about this adventure. Almost a year ago I set out to explore Dealth Valley. I had some downtime so I set aside five days for a trip through Death Valley. Leaving on a rainy Thursday night, I packed up enough food supplies and survival gear to keep me going for a good week. My first stop was the small sleepy town of Lee Vining – ETA some time around midnight. It was a great relaxing drive. My plan was to get a few hours of sleep in the car at a gass station in Lee Vining then a few hours before sunrise, begin exploring the trails and dirt roads along the west lake shore. Nothing prepared me for what I was about to endure. What looked like a relative featureless landscape on Google Maps turned out to be hell on earth. I’m pretty sure my Nissan Murano was not designed to endure this kind of landscape.

If you are not familiar with the story behind Mono Lake, you definitely should read up on it. Once close to the lake, you are immersed in a world of juxtaposition. It is serene, tranquil, eerily beautiful, so far from civilization and wild. At the same time, it is painful! Nature here is callous, hardened if not lifeless. I do mean hardened in every way. Every bush, plant, and twig is literally petrified alive thanks to the extremely high concentration of minerals in and around the lake. Walking and driving, you hear and feel the hardened bushes scratching the car like sharp tentacles and claws of daemons reaching up from the depths of hell, screaming in pain and begging you to save them. Often times I just gave up trying to to walk to the bank – after my car hit a dead-end – because the bushes were literally ripping my jeans off. The sharp rocks and mineral formations were scraping away at my shin through my jeans. I am not much of a religious person but Mono Lake is spiritual experience once you decide to venture off the beaten path. They don’t call it Death Valley for nothing.

Rushing to catch the sunrise over mono lake. 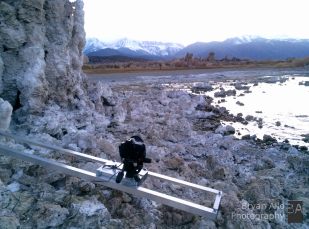 Having to haul my camera gear (30lbs of camera gear + 8 foot time lapse track and dolly) through all this in the pitch dark with a small LED head light was obviously a lost cause. I really wanted a solid shot of the sunrise and was willing to go to great lengths to get it but after spotting several coyote eyes looking at me a stone throw away I decided it was time to retreat to the comfort of my car and regroup. I continued to drive north and after almost getting stuck in a fast moving two foot deep stream, eventually hit the shore line just as the sun was coming up. I managed to get two time lapse sequences which I have yet to release as I hope to go back again to fill in the blanks. The big feature of this trip was to put my newly fabricated time lapse dolly to use and capture some amazing lapses of the almost alien planet landscape.

Mono Lake was not the main subject of this trip. It was only meant to be a sideshow so after sunrise I continued south, fully intending to make it to Racetrack Playa in the heart of death valley. As with all photo excursions, nothing turned out as planned. After almost wrecking my car, rock crawling on what looked like simple dirt road through the mountains, I decided I would not conquer death valley this time. So I returned to Mono Lake in the hopes of giving it a full photographic treatment. Above is the first shot from that adventure I am making available for limited print. This year I hope to return to Death Valley, better equipped to conquer Racetrack Playa and the lower Death Valley.