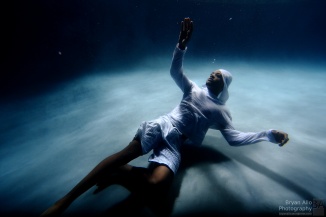 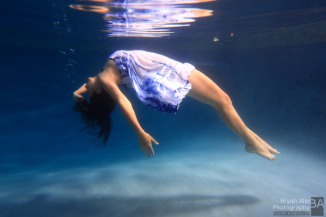 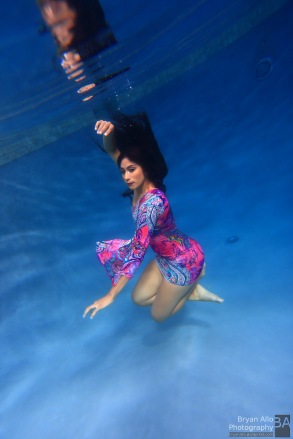 Almost a year ago I started planning and underwater fashion shoot. I wanted to gain experience with this medium and apply my experience with other genres of photography to it. From day 1 it has proved to be perhaps one of the most challenging forms of photography I have tried yet. Aside from the fact that I had to put this shoot on hold through the winter due to the weather, I have continuously run into one major roadblock after another.

It started with water proofing my camera. After careful evaluation I settled on the DicaPac WP-S10 as there was no need for a full blown scuba setup in a pool. It is a relatively very affordable solution and enabled me to mount a pocket wizard RF flash transmitter. Two triggers were mounted to two high power strobes on the edge of the pool, directed downward to the surface at a roughly 45 degree angle to each other. In my initial tests, the RF triggers worked in the water but on the day of the shoot I quickly learned that my tests were conducted in a very controlled fashion and RF signals simply will not penetrate water enough to reach the triggers.

This threatened to deal a major blow and setback as the sun was setting and sky very overcast. However I modified my shooting technique to keep just the very top of the DicaPac housing above the surface of the water, just enough for the RF triggers to sync. I shot as wide as possible to incorporate as much of the surface without having to drop below it. This obviously allowed only one vantage point, where I was going for more dramatic angles. I have some ideas on how to address this issue and will be testing them in the coming weeks. I used the Canon 5D Mark III and Canon EF 17-40mm f/4L lens.

A successful underwater photo shoot requires a team or creative, like-minded, passionate people. From the models to the makeup artists to the folks hosting and supporting the shoot. It requires a fair amount of planning and forethought. I would like to give special thanks to my good friend at Steve Phang Photography for all the support, creative and technical inspiration he has given me all these years. It was definitely a fun, very productive learning experience for all involved.