While taking a break during a fashion photo shoot this summer, one of the hair and makeup stylists caught my eyes. I thought she was very photogenic and most of all fairly unaware of it. I snagged a couple shots her so I could revisit her look when I had some downtime. You can see those shots in my previous post Behind the scenes – Fashion Shoot.

I finally got around to catching up with Hannah early Monday evening. While this was more of a test shoot – I almost always do a test shoot first before doing any photo projects – I did get quite a few great shots. Below some of the first shots to make it the final cut and editing. I will post more (with different outfits) as I finish final edits. Hair and Makeup was by none other than Hannah herself. The whole shoot was a breeze.

For this shoot I used the Canon 5D Mark III with the EF 70-200 f/2.8L IS II USM lens. I mostly employed two Canon 430EX speedlights manual mode synched via simple RF triggers. I shot handheld in manual mode at f/2.8, ISO-640 and 1/80s. AF was one shot. Image stabilization ON.

On a side note, I’m not sure I can go back to shooting E-TTL again. The 5D Mark-III has forced me to learn manual flash lighting and I have to say it’s a much better way to shoot. 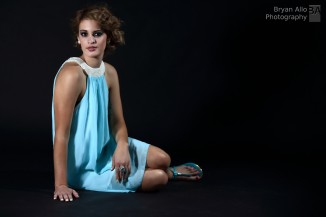